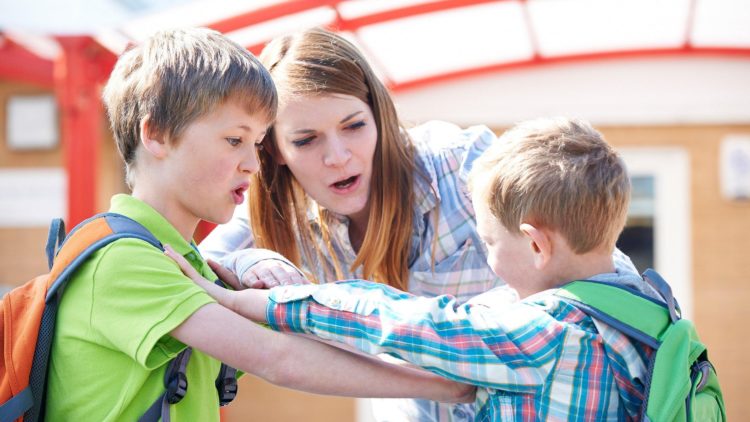 I’m proud to say I haven’t been in a physical altercation since elementary school.  However, I was always raised to defend myself if need be.  If you have no choice but to fight, then by all means use physical force if necessary.  Essentially this is what I’ve taught my own children.  When you’re younger, sometimes things happen and occasionally you might get into a scuffle with either an enemy or even one of your friends.  Turns out all the fights I got into in elementary school were in fact with friends.  Talk gets heated, words are exchanged.  Then comes a shove, and occasionally the fists will fly.  So when I heard about my son’s first fight the other day I wasn’t surprised, but clearly I was concerned and wanted to know what happened.

It’s never fun when you get a text from your wife concerned something that happened at your son’s school.  So when I received a text about my son getting into a fight I wasn’t exactly pleased.  At the same time I kind of smiled because well, hey, it’s elementary school. My oldest son who is 9 and in 4th grade was on the basketball court playing with his friends.  One of his friends proceeded to take the basketball and wouldn’t give it back to anyone who was playing.  My son starting yelling for him to give the ball back and all of a sudden the yelling turned into curse words which eventually led to my son shoving his basketball hoarding buddy.  His friend pushed him back and eventually one of the teachers who was out there intervened.  This was probably the least juicy fight story I’ve ever heard of in my entire life.

Look, I was born in 1979 and grew up in the 80s and 90s.  Fights were pretty common and it took a hell of a lot more than a shove to stop something on the blacktop.  But I digress.  I’m glad a teacher stepped in before these two could start to wrestle and God forbid really hurt each other.  I then found out that my son’s punishment wasn’t even detention or anything like that.  He had to eat lunch the next day with the Vice Principal and he had to skip recess.  Man, this story is really boring, right?  So let’s get to the meat of it all.

What I told my son

I told my son what I always tell him.  I was glad that he stuck up for himself and got aggressive when he needed to.  At the same time in this particular instance it would have been nice if there was no shoving, especially instigated by my son.  I told him it wasn’t necessary at all.   But I did proceed to talk to him about asserting himself.  That he should never be afraid to speak his mind and stand up for himself when he felt he needed to.  As a fourth grader, many kids do this in the form of being physical.  I know that in time my son will use his words more and speak out instead of giving a shove.  But like I said, in this case?  I’m not at all upset about the shove.

Then my son asked me about fighting and what I’ve been involved with.  As I said before, no fights for me after elementary school.  Even in college, in my fraternity days when my gang got into fights with other gangs at bars, I managed to stay out of physical altercations.  If anything I was the guy dragging people off of other people.  I’ve always been able to talk my way out of anything physical and frankly I’ve barely if ever had to do that anyway.  But I will say this: I will 100% use my body if I have to.  I’ll throw as many punches as it takes to get someone off of me or prevent them from harming people I care about. And that’s exactly what I told my son.  If he doesn’t have a choice, then he’s got to do what he needs to do to defend himself and those he cares about.  If that means throwing a punch or wrestling someone to the ground, then that’s what it means.

Kids are softer these days

What do you want me to say?  I’m not going to sugar coat it.  Participation trophies, cancel culture, not being able to take criticism, you name it.  Children are brought up in a world that simply isn’t the real world.  Most kids today are coddled.  They’re not taught to lose and get up.  They’re taught to never have to fight in the first place.  But once you get out there and have to fend for yourself, the world isn’t so supportive.  The world isn’t so apologetic or receptive to your complaints.  So why instill this in children?  Why entitle them?  Look, that’s just my opinion. I could be wrong.

But seriously, when’s the last time you saw a group of kids by themselves, playing until dark?  When’s the last time your kid said to you, “mom, I’m going out!” and you said back to them, “OK just make sure you’re home before dinner!.”  That’s a fantasy land today.  As much as I don’t want sound like the old man who says “back in my day” but come on man, back in my day I walked two miles a day to school beginning at age 12.  I rode my bike nearly 5 miles to summer camp.  This was all by myself.  My parents weren’t worried about me.

I get it.  Today’s different.  Plenty more dangers out there and such.  But I also think that the alert level on people is also too high.  And it’s been artificially made high by “wokeness” and flat out paranoia (coming from everywhere).  But if there’s one constant about the world I know, it’s this:  The world is never sympathetic to your plight, ever.  Either you scrape and claw for everything you want, or you’re left in the cold (unless you’ve inherited it all or are born into it).  So when my son gets into a fight at school, depending on the circumstances and what I hear about said fight, I’m willing to bet that 99% of the time I’ll in some way be proud of him.  Sue me.