Look, it’s not the breakfast of champions.  I’ll be the first to admit it.  However, this is exactly what my 9 year old and 5 year old sons were having for breakfast the other day.  I’m not proud of myself, I’m not, I promise you. Many of you may be thinking to yourselves “what a crappy parent this guy must be.” Perhaps you’re right. McDonald’s isn’t exactly healthy for anyone let alone my own children. But I’m willing to bet my life on this fact: most parents reading this can 100% feel my pain and have inevitably given this kind of breakfast to their own kids at one point or another. And guess what?  I’m here to tell you that unless you actually are a super shitty parent (like for real shitty as in neglectful and really don’t care), you likely did this for a number of good intentioned reasons.  Let’s talk about it right now:

Everyone has a child who won’t eat

I can’t help but to think of two movies that resonate with me as a parent.  The first one is A Christmas Story.  As the narrator says, “every family has a kid who won’t eat.”  Remember Randy refusing to eat his mashed potatoes and meatloaf whining “I hate meatloaf, double beatloaf?”  The second movie?  Mommie Dearest.  Remember when Christina wouldn’t eat her steak and Joan Crawford leaves the damned thing out for like 3 days until she eats it?  Christina actually wins the battle by refusing to eat the undercooked red meat, but you get what I’m saying.  Any parent out there has been through the trials and tribulations of trying to get their children to eat.  And it sucks.  There’s no other way to put it.  Look, I’m not screaming “no wire hangers!” at my kids and shoving food down their throats, but I’m well aware that they’re young enough where they don’t really understand “it all.”  And it’s my job to figure out a way to keep them healthy while not completely starving them too.  And if that means putting a smile on their faces by letting them eat a refrigerated Chicken McNugget because they won’t eat anything else before getting on the bus to school, then that’s what I’m damned well going to do.  Will I do it every day?  Of course not.  That’s where you’re bordering the line of insanity and complete negligence.  The key is to be somewhere in the middle. 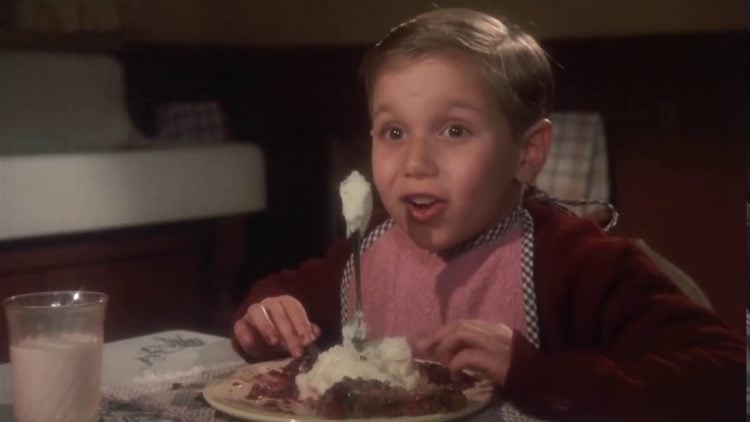 You want your kids to be happy

Any parent worth a salt wants their kids to be happy.  But as all of us know there’s fine line between letting your child be happy and flat out spoiling them to their own detriment.  That line tends to shift on a daily basis doesn’t it?  I mean one day you find yourself letting your child eat candy upon waking up, and the next minute you visit another family who seem to have the most behaved and nutritious kids, and you say to yourself “what the hell is wrong with us?”  So you wind up becoming a tyrant for a week and realize that it’s just not working.

Here’s the thing about wanting your own children to be happy.  It’s a good thing and it’s nothing to be ashamed of.  It’s certainly better than being the other way around.  But the key in all of this is balance.  My point is that you can make your kids happy and also be a responsible parent at the same time.  Can you do it ALL the time?  Absolutely not.  That model unfortunately doesn’t exist.  But when we’re talking Chicken McNuggets, it’s not a crime to feed them to your kids knowing it’ll get their asses on the bus and it’ll save you some valuable time.  That valuable time may have been wasted trying to convince your kid to eat an apple when you have five minutes until the bus gets here  The fact is, some things just aren’t worth it.  Your kids should be happy and you should be happy making them happy.

Something is sometimes better than nothing

If it’s a kid who’s eating McDonald’s vs a kid who’s eating literally nothing, I’m taking the McDonald’s kid.  As a parent you gotta get something in their systems.  Even if it means fake meat, nitrates, and God knows what else.  In many cases getting something in their bellies is in fact better than nothing.  Again, I’m talking in moderation here.  Going back to my previous example, if you have five minutes until the bus arrives and you’ve got a Dunkin’ Donut on the table vs the oat bran salad that there’s zero chance your kid even looks at, you’re going donut every single time.  But gain, it’s in THOSE times only.  Not EVERY single time.  Choose those moments where something is better than nothing.

Let’s review. Sometimes you just gotta take what you can get. And if it takes refrigerated nuggets with barbecue sauce to get my kids to eat I suppose it’s better than nothing at all. Another thing this crazy breakfast has taught me? Just when I thought I used to eat weird crap as a kid, there’s always someone that’s going to top it. Might as well be my own flesh and blood. Life isn’t always going to give you filet mignon, sometimes you gotta take the nuggets to keep things going.

Handling for the future

So how do you avoid having to give your kids McNuggets on a daily basis?  Because that’s the ultimate goal here isn’t it? They key here is to have the right balance.  In my eyes there are a few things you can do to improve your chances for success.  Here they are:

Good luck out there folks.